There’s Gotta Be an App for That… 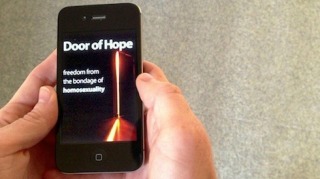 I have friends who are gay, lesbian, bi-sexual, transgendered or what have you. For the record, I don’t care. While I am a Christian, my religious beliefs tell me to love my neighbor and God is the ultimate judge – it’s not my job. So that’s how I conduct my business, whether right or wrong. So now that I’ve laid my cards on the table, I wanted to address something that caught my eye the other day…

“The Cure for Gay”

As quoted from MSN: “Depending on your point of view, the notion of a “cure” for homosexuality is utterly laughable or a serious possibility. In the latter category, a site called Setting Captives Free offers a new app somewhat curiously titled “Door of Hope” that will allow you to “find freedom from homosexuality.” Oh, and that’ll allegedly happen in 60 days. It’s reportedly available via Apple iTunes and Google Play, along with a number of other apps tailored for your specific sins. “New Wine” will get you off the booze, “In His Image” will free you from anorexia and bulimia, “Higher Stakes” eliminates your gambling jones, and “By His Wounds” will give you “freedom from self-injury.” Now if they could just come up with one that would clean your oven.”

Now, 24 hours after appearing on the Apple store, it was pulled and an online petition was put in place to pull it from google apps. It has over 70K signatures.  I’m sure the whole topic offends a wide variety of people ranging from homophobes to homosexuals.

I read one of the possible reasons this app was pulled from Apple iTunes app store was because the mental health practices associated with ‘curing’ homosexuality are illegal in many places in the US, and have been condemned by the US mental health community. Apps that encourage or assist in illegal activities are disallowed in at least the Apple App store contract. Interesting perspective. However, I think we are probably past the draconian days, or are we?

It’s an interesting question and some food for thought. But would the same brouhaha be happening if someone launched a “Cure Heterosexuality” app? What about an app to turn straight people gay?  Would anyone who complained in any of the aforementioned instances be labeled bigots or haters? Probably.

For me though, this whole ordeal is kind of about censorship. Frankly, I don’t want to go there. It reminds me of Tipper Gore and the beginning of the music ratings in the 80’s. Censorship is a slippery slope to tread down and once down, there’s not a way to climb back up.  Rather like Alice and the rabbit hole.