Lately I’ve been binging on Hulu episodes of America’s Next Top Model. For some this may sound a bit bizarre. However, there is method behind the madness. I’ve been studying women and their personalities, interactions, expressions and movement for my characters. Not so bizarre now, eh?

So here’s some of what I’ve learned.

1) Even the most beautiful woman has flaws. In fact, her flaws are what give her depth and help the reader (viewer) connect to her. Without imperfections, the female character is flat and lifeless and has no opportunity to learn, change and grow.  Who wants that?  ANTMs need to learn how to do the job. They aren’t good at what they do. This means my characters don’t need to be “Miss Perfect.”  In making mistakes, an inner character is built.

2) There can be only one.  The show generally starts out with thirteen girls and through the process of competition and elimination there is a final winner. At some point it becomes pretty clear who the front-runners are and who the finalists/winner will be. If you have a female lead character, you must do the same thing. Other characters shouldn’t over-shadow your protagonist / antagonist. If they do, you need to beef up her/their presence.

3) ANTM points out with the model’s pictures there is a fine line between couture / sexy and “hootchie/ghetto.”  Sex may sell, but unless you are writing erotica, your female main character shouldn’t always be in situations that have to deal with sex. Other characters shouldn’t always be talking about her body, the way her clothes fit her body or the way she uses her body.

4) A woman has more emotional range than a gnat. They aren’t “always” crying, bitchy or what have you. I love Tyra Bank’s expression “smize” – smiling with the eyes. I love this photo because it shows this “emotion” beautifully. Your character can do this many different ways. What does your characters’ eyes say about them?  Can you portray body language on the page to “show don’t tell?” It’s a valuable tool.

5)  Men are from Mars. Women are from Venus. Women handle relationships MUCH differently than men. We catch nuances in conversation and read into situations that most men wouldn’t catch if it were handed to them on a silver platter. If you aren’t a “people watcher,” go to a restaurant and eavesdrop on a group of women having lunch / dinner. Watch the body language and facial expression while listening to how they speak with and to each other. Then, do the same thing with a group of men. Night and day.  Mars and Venus.

I’m sure there is more valuable information that may be gleaned from America’s Next Top Model. After all I’ve only watched the first 10 seasons. I believe there are at least 10 more to go. 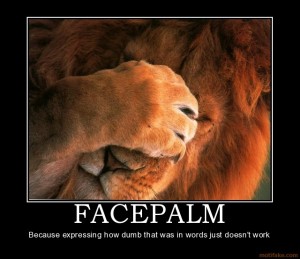 1) “You know” or “Ya know.”   This one may be pretty obvious and it tops the list for me. No. I don’t know. That’s why I asked. These are generally filler words and don’t articulate anything in a meaningful way to a hiring manager or a character in a story.

The fix: Simplify. Visualize what you are going to say before you say it and try to cut out unnecessary words that do not best illustrate your point.  As a writer I find word economy is paramount and these are words that are completely unnecessary unless writing a character who speaks like that all the time. Those are rare indeed.

2). Curses. Oh my. Even on the best day with the most laid back HR representative, this is a bad idea.  Here’s the skinny. You don’t ever, ever have to curse in a job interview to get your point across. EVER. If you really think that you need to accentuate and punctuate a point with an expletive, then be creative and utilize those mad skills that would make Walt Disney proud. Yes, G-Rated options are best. There’s no need to drop an F-Bomb in an interview.  If it’s dialogue in a book or other printed piece, my advice is to use curse words sparingly – otherwise the punch is lost in translation.

A prime example of this is in a wonderful book called, “The Help” by Kathryn Stockett. The classic line, “Eat my shit” wouldn’t have had such impact if Minny or other characters had dropped curse words throughout the book and its subsequent movie.

If your normal vocabulary resembles a pirate’s, take some time BEFORE an interview to practice your responses to questions and figure out how to answer them without dropping one of Carlin’s “Seven Dirty Words” or other slang that would make a hiring manager cringe.

3) Acronyms. There are a lot of acronyms out there people just may not understand. Don’t just assume people understand industry jargon actually spell it out as it were.

For writers, you may use the acronyms after you have spelled out what it stands for once or twice so the reader understands exactly what it is the abbreviation stands for. However, try to keep the number of acronyms down to a minimum, unless you are a technical writer working on a specific piece.

4) Stereotypes. An interview setting is no place to refer to people of other genders, sexual orientations, nationalities, ethnicities, races, handicaps, religions, or any other diversity by using any slang, negative terms, slurs, or other denigrating language. Ever.

For writers, the piece you are creating and the character must directly relate to the nature of the stereotype, lest you alienate your audience. You must use caution writing stereotypes.

5) Jokes.A good friend pointed out, all jokes aside, there is a time and place for humor. Someone just may not “get” you. Beyond that, the “joke” may actually border on sarcastic, racist, inappropriate on another level or just plain crass. Avoid it if you can and certainly don’t lead your opening line with,” A lady walks into a bar…”

There are many inappropriate responses that may be given during a job interview. However, with a little forethought and practice, you can avoid some of the most common mistakes that will leave a bad taste in the hiring manager’s mouth and you without a job.

“Some feel that to court a woman in one’s employ is nothing more than a serpentine effort to transform a lady into a whore.”  ~ Leopold, from “Kate & Leopold” (2001)

In today’s world, it’s so easy to come up with a crass comment or put-down; however, there is something to be said about thinking one’s words through in order to have the most impact. The aforementioned quote from “Kate and Leopold” is a prime example of setting someone in their place without specifically calling someone names or challenging them directly. It’s beautifully written and something to think about next time you wish to utilize the art of “speechfare.”

Related side note: Meg Ryan and Hugh Jackman are a perfect casting combination and make for a lovely couple in this movie. Liev Schreiber, who subsequently worked with Jackman in the 2009 movie X-Men Origins: Wolverine – starts off as a cad and becomes completely likeable. This movie has some brilliant cinematography, sharp and snappy writing and Jackman’s charm makes this a romantic comedy worth checking out.